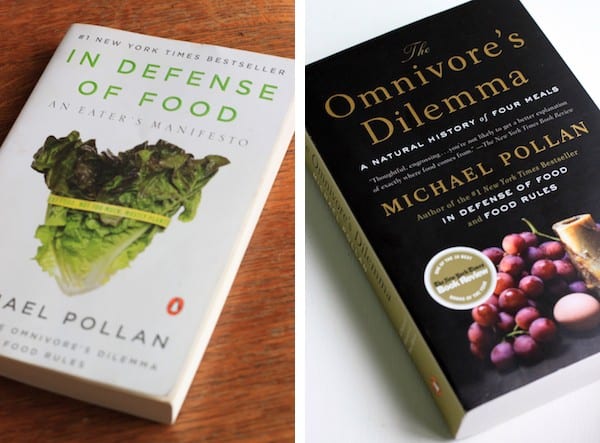 I have a confession. I’m a little behind on my what I’m reading posts. Over the past couple of months I’ve read both In Defense of Food & The Omnivore’s Dilemma, two of Michael Pollan’s bestsellers, and in the process learned more about industrial food, big and small organic farming, feedlots and fast-food restaurants than I ever knew I could. Pollan is smart, honest, witty–and his books are just fascinating.

“When animals live on farms, the very idea of waste ceases to exist; what you have instead is a closed ecological loop.”

Mixed farms make biological sense! We need to feed animals waste products of crops, and feed crops waste products of animals, but crops and animals no longer co-exist on conventional farms in the United States. This means  crops are faced with fertility problems and feedlots with poop problems.

“What gets a steer from 80 to 1,100 pounds in 14 months is tremendous quantities of corn, protein and fat supplements and an arsenal of new drugs.”

We need cheap calories and protein to produce cheap meat, so most industrial farmed animals are fed corn & soy-based diets. The sad thing is, corn makes cow tummies acidic, bloated, and can even put the animal into a state of acidosis. But instead of feeding cows what they’re meant to eat, industrial farmers pump their corn-based diets full of antacids and antibiotics to reduce the side effects and ward of disease. This is probably why cattle rarely live on feedlot diets for more than 150 days–their bodies aren’t be able to tolerate much more.

Some farmers use genetically modified seeds for more resilient and higher yielding crops but, if you ever took Econ 101, you know that greater yield means lower prices for those crops. GMO seeds are bred to last only one season and consume fertilizer faster than can be replenished naturally. The companies selling these seeds are really the only people who benefit from the farmer’s productivity.

A 1-pound box of pre-washed, non-local, organic lettuce at Whole Foods provides 80 calories of food energy but requires more than 4,600 calories of fossil fuel energy to produce. And when it comes to livestock, most organic farm animals don’t live happy lives like we think they do.

92 cents of a consumer’s food dollar winds up in the pockets of food processors, middlemen and retailers. On the contrary, farmer’s markets take about 6 cents from every dollar a farmer earns and, since they’re local, a lot fewer natural resources, like gasoline, are consumed in the process.

6. Thanks to advances in food science, the typical Western diet is hardly composed of foods at all these days.

The majority of what we find on grocery store shelves are “edible food-like substances” than actual foods. Sad but true.

7. The more complex foods get, the worse they taste and the less healthy we become.

Nutritionism–focusing heavily on individual nutrients, instead of their synergistic effects in whole foods, has only made us sicker and fatter, and made food far less tasty than it used to be.

8. Humans are adapted to, and can thrive on, a vast range of different diets, but the Western diet does not seem to be one of them.

If only it were as simple as it sounds.

10. We need to get back to eating food, just not too much, and mostly plants.

So, knowing what I know now, have I changed at all?  Yes.

Since finishing these two books I’ve definitely made an effort to eat more local and organic foods, when time and the budget allows. I frequent the Saturday farmer’s market almost every week and pick up as many fresh fruits & veggies there as possible. We also now get most of our meats from the neighborhood butcher, who only purchases local, antibiotic-free, grass-fed animals.

Want to know another funny effect of reading these two books? I now yell, “Grass-fed beef!” every time the hubs and I drive by a field of grazing cattle. Try it the next time you go on a road trip. It feels good and I’m sure makes the cows happy.

Foodie books: Read any good ones lately? If you’ve read The Omnivore’s Dilemma or In Defense of Food, what’d you think? Did it change the way you eat or shop for food?