I used to love BBQ chicken. I loved it so much I actually wore out my BBQ chicken tastebuds! One sad day, after having BBQ chicken probably once a week for years on end, I found I couldn’t stand the taste of the stuff anymore. Imagine that.

It’s been years and I don’t quite know what finally made mecrave it last week but my BBQ chicken tastebuds are BACK and this recipe definitely has something to do with it. It’s sweet, but not too sweet, which is what I think I stopped liking about it originally. This BBQ chicken is just a bit tangy, spicy and is perfect in a sweet potato skin. 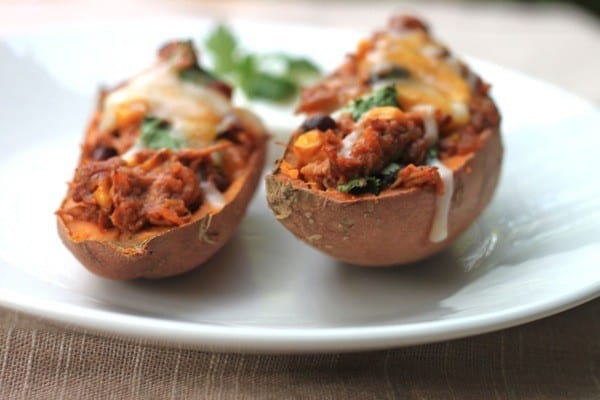 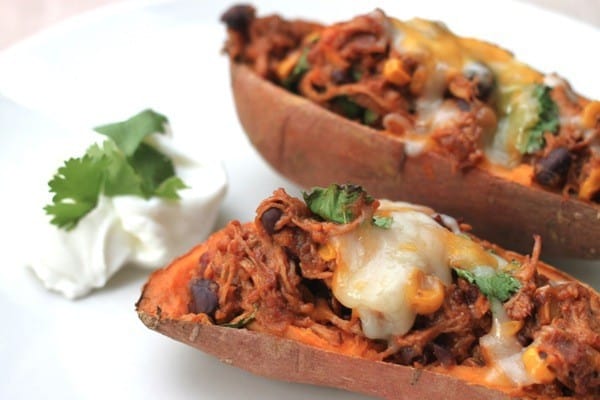 The best part about the chicken is that it takes almost no effort to make. I let the slow cooker do all of the work. 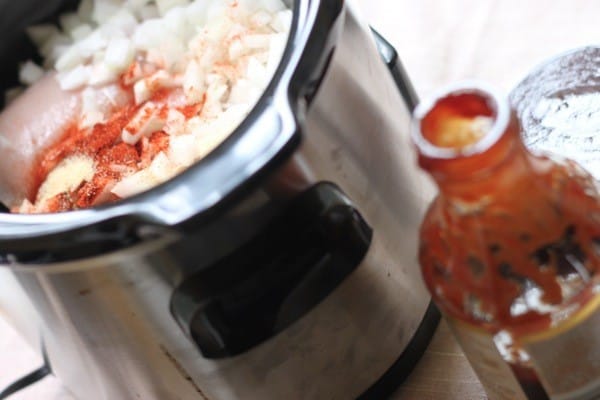 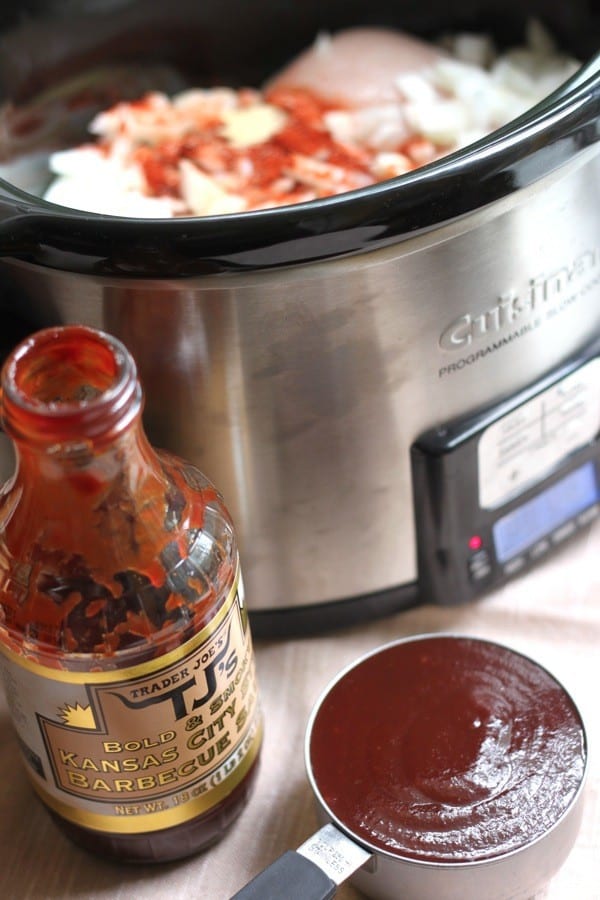 I set it on low and ran out to do some errands. Man did the house smell amazing when I got home a few hours later. I planned to eat dinner around 7 that night but I just couldn’t wait so I popped these babies into the oven as soon as I walked in the door. 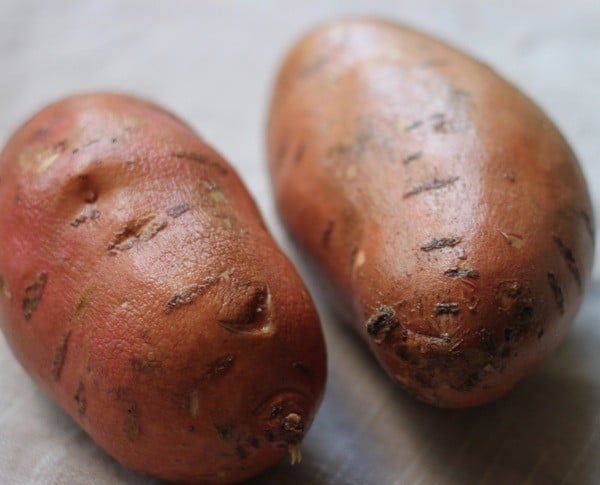 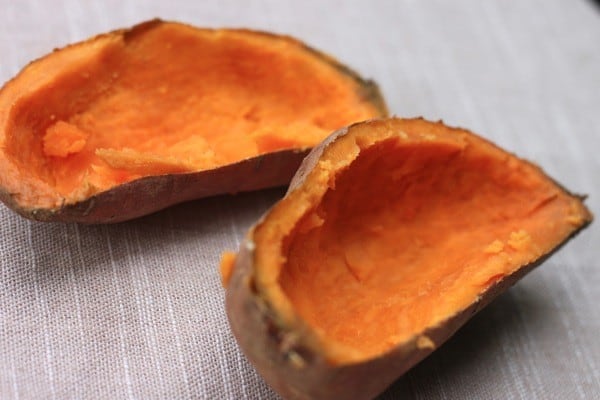 Since I’m not one to waste food, I added the flesh of the sweet potato back into to the slow cooker along with some frozen corn, Greek yogurt and cilantro for the last 15 minutes. While those flavors mixed, I pulled the chicken with 2 forks, which practically fell apart by itself after 3 1/2 hours of slow cooking.

All that was left to do was fill each sweet potato skin with a good helping of bbq chicken, top them with a sprinkle of cheese and pop them under the broiler for a few minutes.

They’re low in fat, high in protein and fiber and are so, so delicious. Not your average potato skin, is it? A dollop of non-fat Greek yogurt in place of sour cream completes the experience. 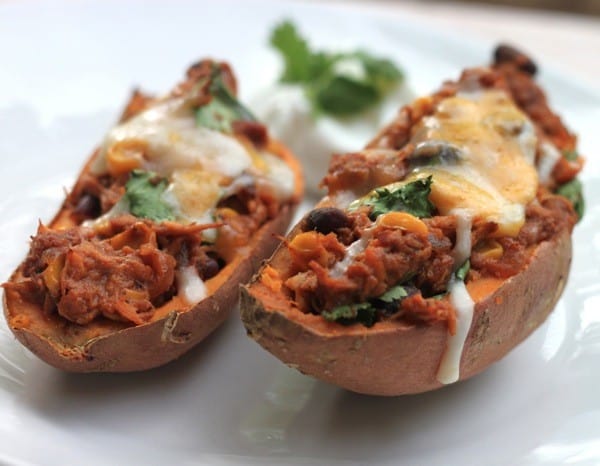 I found that the bbq chicken can even be made ahead of time. Just bake the potatoes and reheat the chicken right before serving, mixing in the potato at the last minute. Your friends and family will be impressed if you whip these out at your Memorial Day cookout this weekend!

When ready to eat, bake sweet potatoes (naked) for 45 minutes – 1 hour at 175ºC / 350ºF / Gas Mark 4. Let cool for 5-10 minutes before slicing in half and scooping out the flesh. Add flesh to the slow cooker and stir until well incorporated.

Once cooked, shred chicken breasts with two forks. Add chicken back to the slow cooker along with corn, Greek yogurt and cilantro. Cover and let sit for 10-15 minutes.

Scoop 3/4 – 1 cup of bbq chicken mixture into each sweet potato skin. Sprinkle with shredded cheese and place under a broiler for 3-4 minutes until cheese is melted.

Serve warm, with a dollop of Greek yogurt in place of sour cream.

Oh, and just in case you were wondering, the leftover chicken tastes wonderful any which way. I had some in a wrap for lunch the other day! 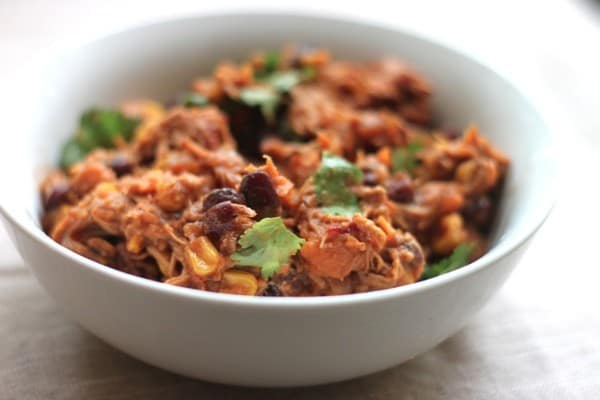