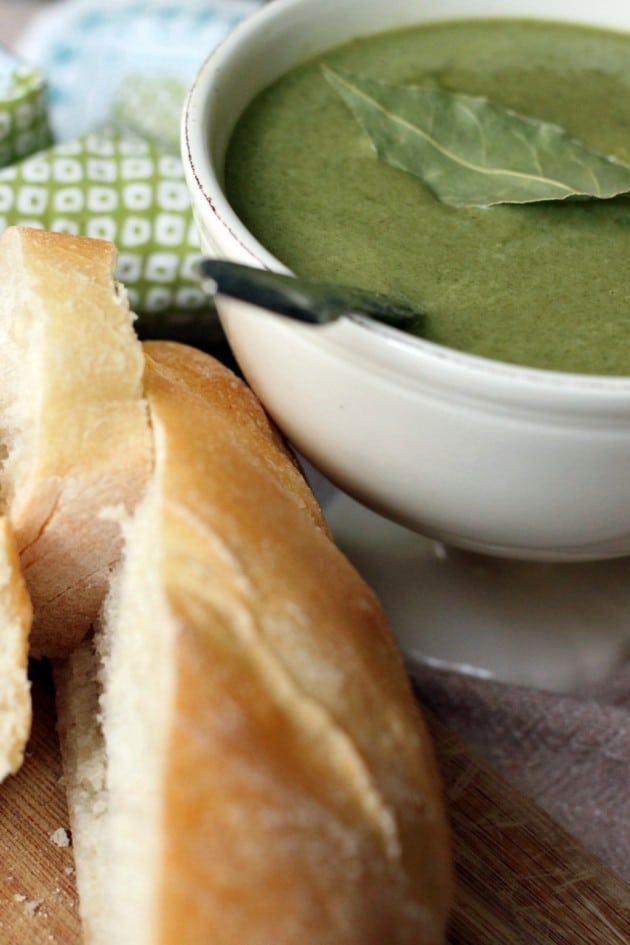 I’m a soon-to-be Registered Dietitian. The desire to scarf down spinach salad at least once a day should be in my genes, right? You’d think so the way I grab at least a bag or two every trip to the grocery store. Well, hold onto your seats my friends because this may rock your world.

There, I said it.

Maybe it’s the tougher texture of the leaves or the very earthy flavor of it but raw spinach and I aren’t friends. I’ll eat it, but I’d take a huge bowl of Baby Spring Mix over a small bowl of spinach any day. Cook that spinach, even just a tiny bit though, and I can find almost any way to incorporate it into a meal or snack that I could devour in a matter of minutes. For example, my quinoa gratin, goatichoke dip or this creamy spinach artichoke soup.

Loving cooked spinach isn’t a bad thing though. Cooking it a little bit actually helps release some of the iron and calcium in those leafy greens which means we’re able to absorb more than if eaten raw. WIN.

I had very good intentions when I bought two massive bags of spinach last week but they sat in the fridge untouched for a good 6-7 days. You know the look of spinach that’s going bad. It starts turning yellowish and condensation builds on the inside of the bag… I knew I had to do something quick before all was lost so I did a little searching online for spinach soup recipes and found a basic, tasty recipe from The New York Times.

I love spinach and artichokes together (but really, who doesn’t) so I tossed a can in for good measure. 10 minutes of simmering on the stove with a little broth, onion, salt, pepper and spice and it was almost done.

My immersion blender is getting up there in age so I didn’t bother with it this time around. Instead I carefully pureed small batches in the blender, which obviously still managed to explode all over me. After a quick wipe down to get the spinach off of my forehead, I had a delicious spinach artichoke soup. Get this. Not one leaf of wilting spinach went to waste.

I can’t think of any better way to eat a pound of spinach and artichokes in 4 days.

Adapted from The New York Times

Combine spinach, onions, artichokes and stock in a saucepan over medium-high heat. Once boiling, lower heat to medium low and cook, stirring occasionally for about 10 minutes. Remove from heat, add pumpkin pie spice. With an immersion blender, carefully puree the soup (or very carefully puree in a blender, allowing soup to cool a bit beforehand) in small batches of cooler soup) Return to pan if you used a blender, add half & half and reheat gently over medium-low heat for about 5-10 minutes, stirring occasionally until slightly thickened. Serve with toasted or fresh bread.

P.S. The nutrition facts. I was shocked at how healthy this was despite the 1+ 1/4 cups of creamer. The serving size is 1/4 of the recipe or about 1+ cups. Enjoy!