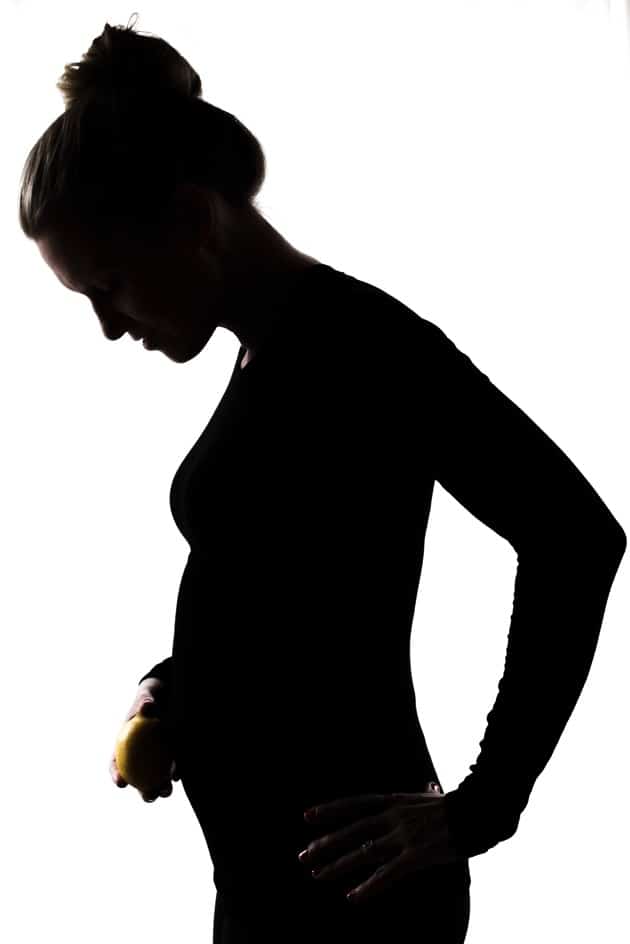 At 24 weeks, I can hardly believe I’m already more than two-thirds of the way through my second trimester. Clearly I’ve been a bit slow to start the pregnancy updates but I wanted to share some of what I experienced those first three months.

I feel like a tiny baby bump emerged the week after I found out I was pregnant, and stayed the same for the remainder of my first trimester. Of course I immediately reorganized my closet–loose tops front and center, clingy ones off to the side–and started perusing Pinterest for maternity fashion inspiration!

So far the hubs and I have done 2 silhouette photo shoots to document the growing baby bump. This one was shot at 14 weeks, the tail end of my first trimester when the baby was about the size of a lemon. Weight gain-wise, I was up 3-4 pounds at my 12 week appointment which is on par with the recommendations.

I feel very fortunate to say that most of those dreaded first trimester symptoms were generally not an issue for me. Other than the paralyzing exhaustion and wanting to crawl under my desk for a nap every day, I really only had to cope with excessive burping (literally after eating or drinking anything) as well as the occasional dull headache and fleeting moment of nausea, both of which seemed worse the days I didn’t have the time or energy to exercise.

With the exception that I’m now avoiding certain foods like sushi and only savoring the occasional sip of wine, my overall approach to nutrition and eating a well balanced diet hasn’t changed a bit in pregnancy. I did experience a few common food cravings and aversions those first three months, though. For a couple of weeks I could not look at a vegetable, except for mushroom pizza, and had zero desire for coffee. Of course my latte aversion seemed to pass just as I had weaned myself off of caffeine– good for the baby but, I will say, those were a tough few weeks for mom! Though not a food, toothpaste would also randomly make me gag. Not fun!

Cravings-wise, fruit tasted unbelievably good those first few months and still does to this day– all things citrus and strawberries in particular. At one point during my first trimester I woke up famished in the middle of the night, quietly tip-toed to the kitchen and ate a half-pound of strawberries in the dark.

Early on I realized exercise made a huge difference in how I felt. It’s hard to describe but the days I didn’t work out I felt incredibly hormonal. Not necessarily emotional–just off, almost always headachey in the morning and queazy in the evening. Being active, even if it was just a power walk around the neighborhood, seemed to offset almost all of that though, which was a major incentive to keep moving despite feeling chronically fatigued. Running started feeling tougher when I was just 6 weeks in–both in terms of breathing and that tiny baby perched on top of my bladder!

Emotion-wise, the first few weeks were somewhat of a roller coaster–exciting and overwhelming all at the same time which, of course, was probably only amplified by the onset of paralyzing exhaustion.

As I mentioned before, the hubs and I knew there was a possibility we had a bun in the oven but for some reason we were still a little bit surprised! Something about seeing that positive pregnancy test (or in my husband’s case, pregnancy spoon) seemed a little surreal for us both, at first. It wasn’t until my first ultrasound at 8 weeks that the reality started to sink in. We then shared the good news with our parents on Easter Sunday the following week.

Just weeks after finding out I was pregnant, Shopbop conveniently had their bi-annual friends & family sale. Anticipating my growing baby bump, I took advantage of the 25% discount and ordered myself 2 nice pairs of maternity pants–a great pair of J.Brand dark wash jeans and these Citizen black skinnies, both of which I absolutely love now that my belly is bigger. (Note to my fellow pregnant ladies: I ended up ordering one size down in the J.Brand jeans if you decide to get a pair too!) I also picked up a couple of maternity jackets–a beautiful, gray, knit bomber on sale from HATCH (sadly now out of stock) for cooler days, and this light, army-inspired jacket from H&M. Oh and lest I forget… I also had to invest in some bigger bras. Pregnancy tatas are real, my friends!

Mamas, what are some of your first trimester memories?

P.S. Here’s a peek at the bump from just last week!