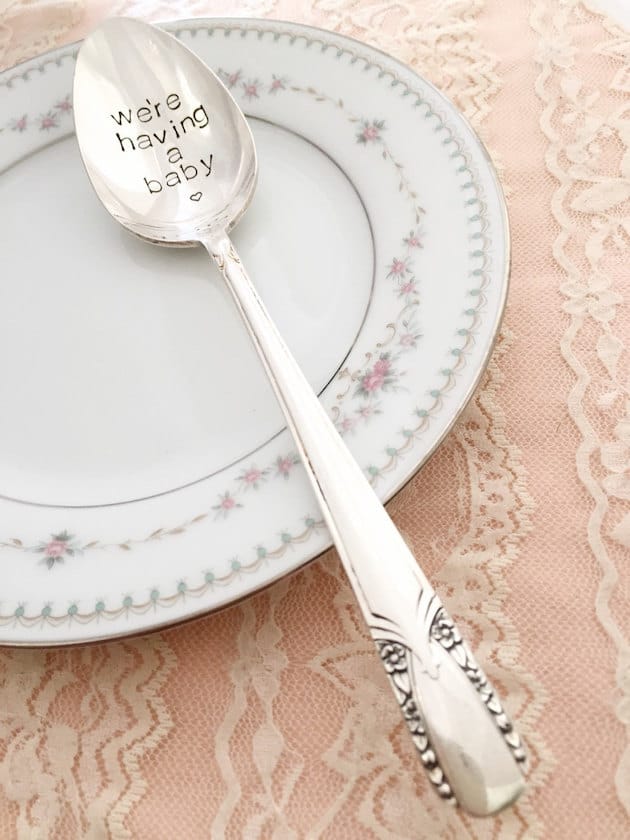 I found out I was pregnant the night before the hubs and I left for a romantic weekend getaway to celebrate his 40th birthday. Since I was a few days late, I decided to take a quick test–mostly to confirm I wasn’t pregnant before indulging in all of the great local wine and craft beer Oregon had to offer. Of course I knew there was a small chance we had a bun in the oven but, I admit, I was still totally surprised when the word “Pregnant” suddenly appeared on the test.

At first I was convinced the test was the faulty 1-in-100 so I kept the news to myself that night and took 2 more tests before work the next morning. Not surprisingly, both of those were positive too. Suddenly the excitement began to set in.

The timing seemed almost too perfect. I decided to wait just a bit longer and break the good news to the hubs in Oregon. Not wanting to leave any evidence behind, I shoved all three pregnancy tests into my purse, along with a very special spoon that I had planned to stick in his latte if and when we got pregnant this year, and met him at the airport after work.

Not surprisingly, hubs wanted to kick off his birthday festivities the moment we landed in Oregon, starting with pre-dinner drinks. It quickly became clear I was going to have to break the news that night, with or without a latte.

Before heading to the restaurant, we stopped at a cute bar housed in an old schoolhouse, complete with a large patio and outdoor fire pits. Given the circumstances, I figured there was as good a spot as any to spill the beans. After we ordered our drinks (I opted for a cider as not to blow my cover), I promptly sent the hubs to find us a seat outside so I could pay the tab and slip the special spoon into his brew.

My excitement grew as I walked back to the table with our drinks. Feeling like I had to call attention to it, I nervously blurted out, “So strange–the bartender stuck a spoon in your beer!”

Not surprisingly the hubs looked completely and utterly baffled. He even grabbed the beer menu to see if the description offered any explanation. Looking back, I still don’t know how I kept a straight face through that! Utterly confused, he stirred, and stirred, and stirred his beer before finally pulling the spoon out and licking off the foam. After a closer look he muttered, “This is weird,” and flipped the spoon around to show me.

That’s about when I lost it—yes, I burst into tears—and the hubs realized it wasn’t weird at all, because we were having a baby! Bear hugs ensued as we both wiped tears of joy from our eyes and joked about this being the “ultimate” birthday gift. I’m not quite sure I’ll ever be able to top that one, no matter how hard I try.

Mamas, how’d you break the exciting news to your partner, or were you together when you found out?