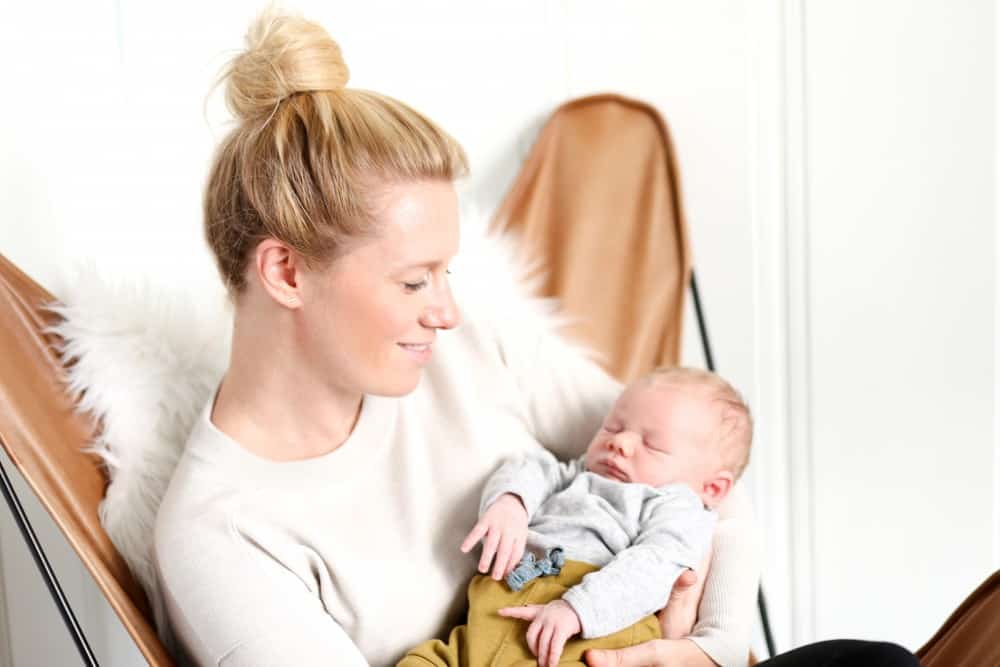 Many thanks for all of your kind words on the birth of our Baby Noah. We’ve been cherishing our family time together and are happy to report we have a very healthy, happy and alert little boy!

The past six weeks have been marked with lots of firsts for our little guy. Noah cracked his first smile, shed his first tear (man was that heartbreaking!) and cooed with excitement for the very first time. He took his first stroll around the neighborhood, celebrated his first Christmas, went on his first hike and is currently on his very first road trip with mom and dad. (We thought a change of scenery would be good for everyone so we packed up the car and headed to our friend’s home in beautiful Santa Barbara for the week!)

At his one month check-up Noah weighed 10 pounds 12 ounces (up 1 pound 6 ounces from birth) and had grown half an inch, measuring 21.5 inches long. He’s proving to be a great little grower! Fortunately nursing came pretty easy to both of us, though we did meet with a lactation consultant early on to address some minor hiccups–no pun intended. Fortunately for us, he seemed to understand the difference between day and night from the get-go and by some small miracle we’ve really only had a few long, fussy nights so far. Noah’s even started to give us some pretty long stretches of sleep at night, sometimes 5+ hours at a time. Last night he only woke us up one time to nurse–another first to celebrate!

My first six weeks of motherhood have been nothing short of amazing, albeit overwhelmingly emotional. I was not someone who always knew they wanted to become a mother so the fact that I’ve fallen in love with being a mom so quickly and taken to it with relative ease has been a very welcome surprise. Thankfully my doctor warned me about the spike in progesterone that happens after birth and the emotional roller coaster that ensues, because no one else ever did! I’m thankful for those emotions though because never before has my heart felt so full. Needless to say I cried a lot in the early weeks, partly out of joy, love and sheer exhaustion, but mostly out of relief: relief for having a healthy baby, an uncomplicated delivery, and to finally be holding our little boy after nearly 10 months of waiting.

Hubs and I know we lucked out with little Noah but adjusting to my new role as a mom hasn’t come without some challenges. The two things I’ve struggled with most since giving birth have been coping with the physical recovery from those 12 grueling hours and adjusting to the new, around-the-clock responsibility I now have for this tiny human.

Noah was a big boy and getting him out was by far the hardest thing I’ve ever done. Whoever says giving birth is like running a marathon is straight up lying to your face. Giving birth is arguably the most traumatic event a body can go through, there’s even research to prove it. I’m just wondering why nobody ever tells you this before you get pregnant! Running an ultra marathon uphill, backwards, barefoot (naked, actually) through two feet of snow would still be easier in my opinion.

Before having Noah, I was under the impression that I’d be ready to start running again after those initial 4-6 weeks of recovery. After all, that is when doctors tell you you can “resume exercising”, right? Wow was I misinformed. Needless to say the recovery process has been slow–much slower than I ever anticipated. This might be TMI but, up until a couple of weeks ago, it honestly felt like I had been hit with a baseball bat a thousand times down there. Strolling to Starbucks for a decaf latte felt like an olympic event.

Lately I’ve managed to get out for a couple of short hikes with the boys but these days my workouts mostly consist of leisurely walking and gentle yoga–not quite the intense, endorphin-releasing activities my body has come to crave. As someone who loves nothing more than a tough workout to relieve stress, not being able to exercise at the level and intensity I’m used to has definitely made it tougher to cope with the challenges of being a new mom some days, especially since we’re sleeping decently well and I actually have energy to exercise. I know this will improve with time but wish I could just get on with it already!

The other big challenge I’ve come to face is the continuous obligation I have to little Noah. Being the kid’s sole food source not only makes it tough to get anything done but turns even the slightest errand a major event. My day literally revolves around when Noah ate last and when he’ll need to eat again. Whereas I used to mentally map out my entire day the night before (i.e. workout/shower 7-9AM, work 9-5PM, commute/run errands 5-7PM, dinner/relax 7:30-10PM), I now operate in 2 hour increments and consider the day a success if I scratch even one thing off my to-do list before falling into bed each night. Some days I have all I can do just to empty the dishwasher or throw a load of laundry in between feedings. I have hundreds of emails in my inbox that need replies, a dozen or so phone calls I’ve yet to return and sat down no less than ten times to write this blog post. The hubs actually took the little man to an art museum yesterday (yes, we’re starting him young!) so I could finish it.

I knew having a newborn was going to be all-consuming but I’ll admit, it’s definitely worn on me at times. It hit me hard when Noah was putting up a fuss about taking a bottle from the hubs a few weeks ago. I turned to my husband with tears rolling down my face and said, “I’ve fed Noah every 2 hours for 3 weeks straight. I’m just really tired. I need a break.”

Things are starting to get a bit easier, though. After trying a couple of different bottles, Noah has made slow but sure progress with bottle feedings recently which means I get a little bit more freedom on occasion. It’s not a lot of time but, when the hubs can cover a feeding now and then, I’m able to step out of the “mom” role to go to yoga, do some writing, or even sip a glass of wine (ok, two) after dinner some nights.

So, the adventure continues. As demanding and overwhelming as being a new mom can be, it has been more amazing, rewarding, and come more naturally to me than I ever expected, which is all I could ever ask for.