I’ve had two things on my black bean to-do list: use dried instead of canned and create a kick-ass black bean soup recipe in time for football season. 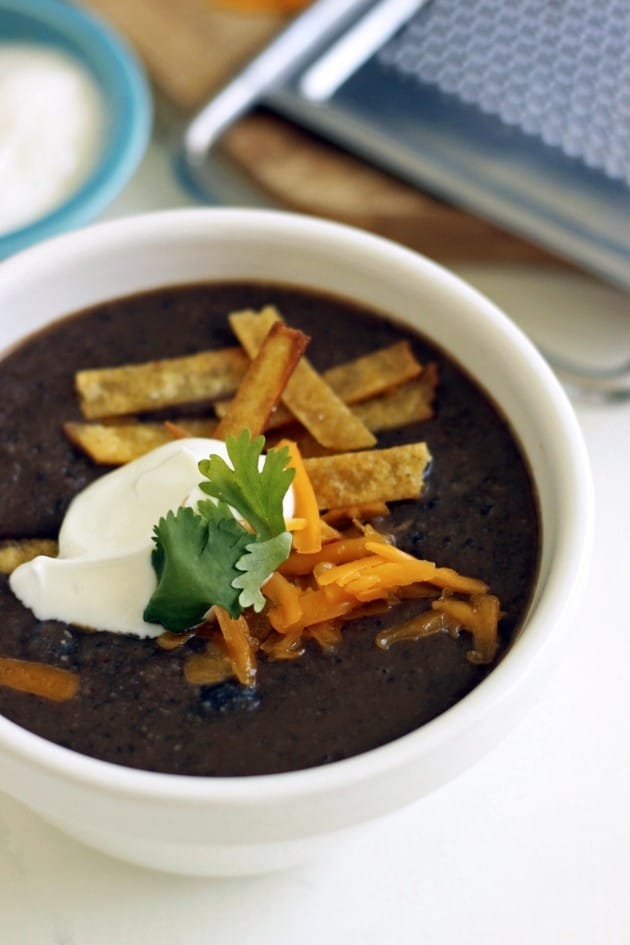 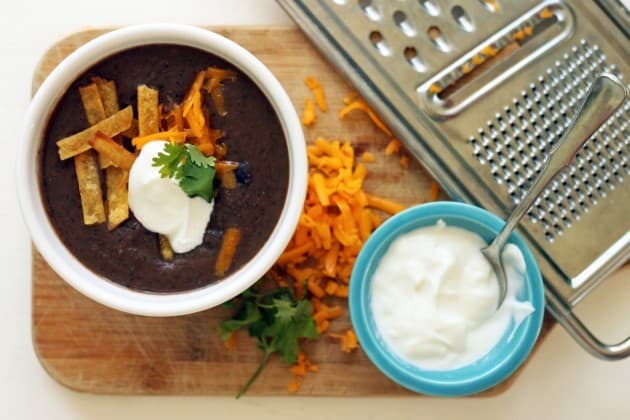 Black bean tortilla soup is one of those foods that just does it for me. It’s salty, savory, packed with protein and fiber and feels indulgent, but isn’t. The perfect black bean soup has a little kick to it, and ample fresh avocado, Greek yogurt and crispy tortilla strips for mixing in. As far as consistency goes, the thicker the better because when served alongside a pile of nachos or bowl of tortilla chips, it doubles as a tasty black bean dip.

Dried bean newbies, don’t be deterred. If you’re in a hurry you can probably make do with canned beans as well but I promise, if I can make a delicious soup with dried beans, so can you. Contrary to popular belief, you don’t need an overnight soak. All you need is a couple of hours on a Sunday afternoon, say while you’re watching some football, and possibly also making some nachos.

I’ve already done the math for you. Blending about half of the beans with some broth will give you that thick, bean dip-esque consistency without turning the whole pot into bean purée. Adding 1 Chipotle pepper &  adobo sauce gives it a mild, smoky spice. Going for two kicks it up to medium. And freezing the leftover chipotles & Adobo sauce in two small plastic bags lets you get three batches of soup, or a least another couple of recipes, from one small can.

And about the tortilla in the smoky black bean tortilla soup… DIY tortilla strips are about as easy, and delicious, as it gets. I thinly sliced 3, small tortillas, pan fried them in a smidge of olive oil until they got crispy and lightly sprinkled them with sea salt. Just try not to eat them all before your soup is done–like I did–because then you’ll have to make more.

It was so freaking good I can’t get enough! This weekend I’ll be doubling the batch and freezing some for healthy, weeknight meals or possibly an impromptu Sunday football party with nachos and bean dip.

In a large pot, combine dried beans and 8 cups water and bring to a rolling boil. Remove from heat and let sit for 1 hour before draining and rinsing beans with cool water. Add beans back to pot; add vegetable broth and 1 cup water. Bring covered pot to a boil once again and reduce heat to a simmer. Cook beans until soft, about 55-75 minutes depending on beans, simmer temperature and salt content of broth.

While beans cook, sauté onion in olive oil and cumin over medium heat until translucent, about 8-10 minutes and set aside. Using the same pan, heat olive oil over medium-high heat and fry tortilla strips until lightly browned, about 5 minutes, stirring frequently. Drain on paper towel and sprinkle with sea salt.

When beans are cooked, remove about half of the liquid and beans from pot; combine with onion, chipotle peppers and Adobo sauce (for serious, medium spice, less if you like it more mild) and puree with immersion blender until smooth. (Don’t forget to freeze the leftover chipotle peppers for future batches or other recipes.) Add puree back to the pot and season with salt and pepper to taste. Serve as a soup with any and all of those toppings listed or as a dip with nachos or simple chips and salsa.

If using canned beans, drain and rinse before adding to broth. Simmer beans for 15 minutes in 3 cups vegetable broth. Puree as noted above and add more liquid to soup as needed until desired consistency is reached.

Black bean soup: Love it too? Like it spicy or mild?