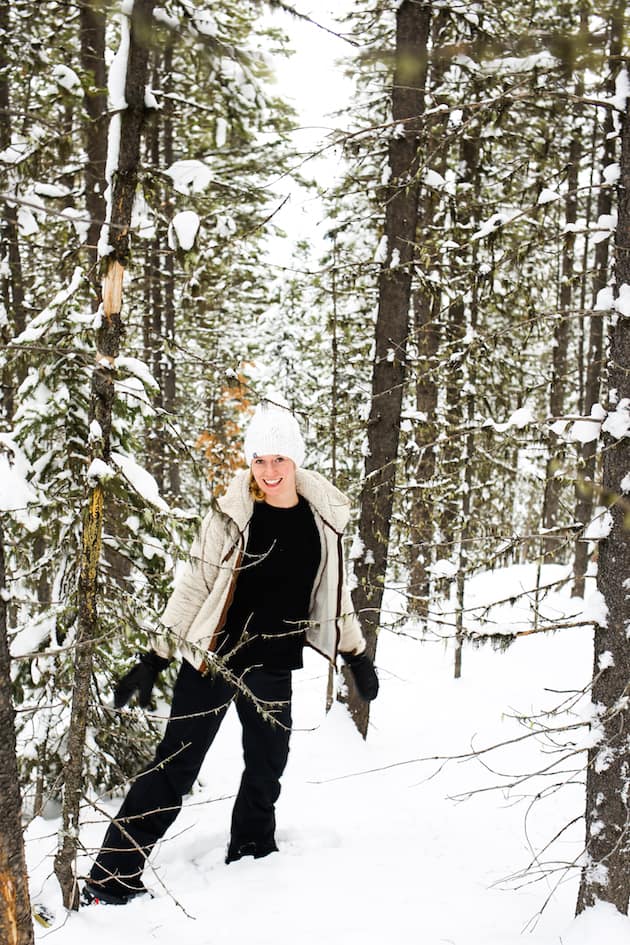 Hi friends! Happy New Year! I’m happy to say I’m back after a much needed vacay that allowed me to unplug and recharge my batteries a bit—which sounds odd considering under every other circumstance we plug things in to recharge, but I digress. 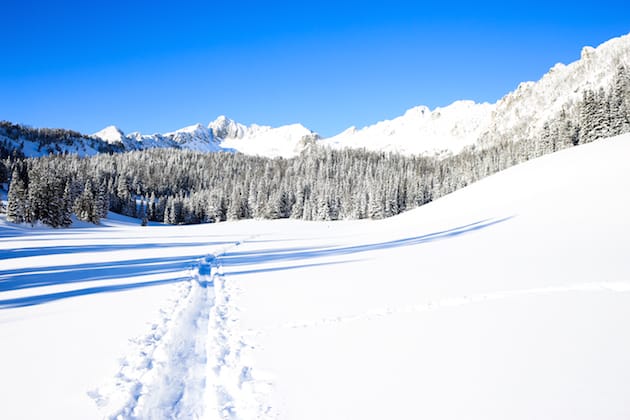 The hubs and I spent 10 glorious days with his family in Big Sky, Montana where we skied and snowshoed in frigid cold temperatures, shared many laughs and even more bottles of wine. 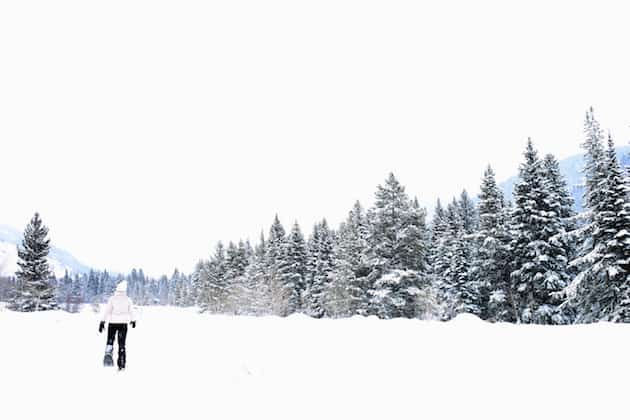 As much as I like to pretend I’m tough on the slopes the truth of the matter is I have zero tolerance for whipping winds, icy runs, crappy visibility or temperatures below 20ºF.
I simply don’t love the sport enough to endure it–especially for what they’re charging for a lift ticket these days. 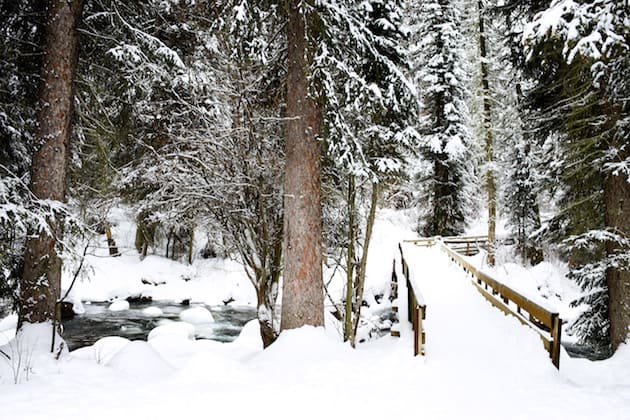 Having married into a family of die-hard skiers, it’s taken me a while to be able to admit that maybe skiing just isn’t my thing, or that I’m only a fair-weather skier. But now that I’ve taken up snowshoeing–well–I can officially do so unapologetically because I finally have an activity that I absolutely love to do in the winter. 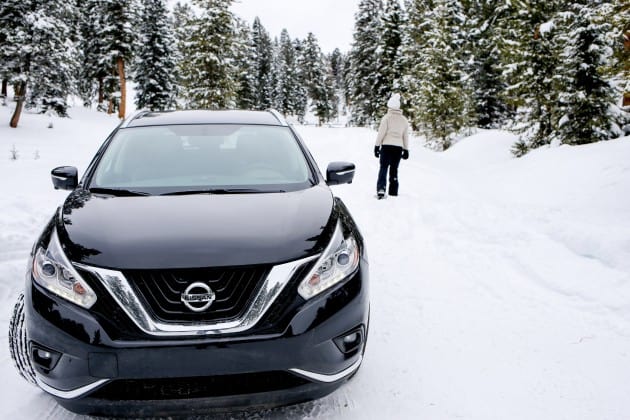 For Christmas this year I decided to get the hubs and myself each our own pair of snowshoes—a little risky considering he’d never actually been, but with our mutual love for hiking, the outdoors and being active, and his ability to tolerate even the coldest of days on the slopes, I was fairly confident he’d be hooked like I was after his first tromp in the snow. 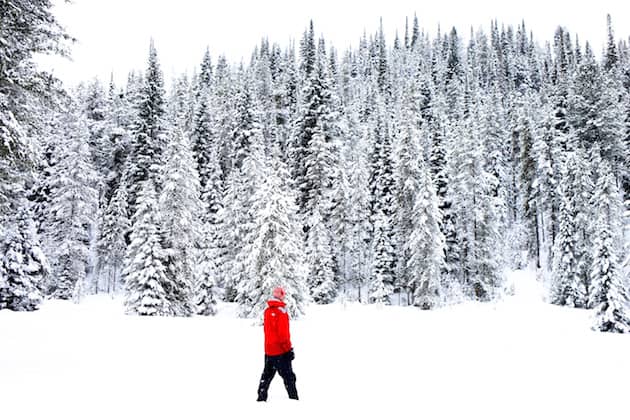 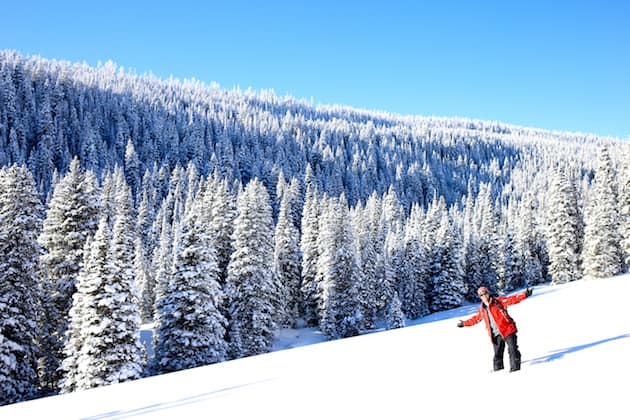 If you’ve not been, here are 5 reasons to love (and why you must try) snowshoeing this winter:

1. Snowshoeing is one killer winter workout. I don’t know about you but I often judge a workout by how much I sweat. I can probably count on my fingers the number of times I’ve broken a sweat while downhill skiing. I realize this doesn’t say much for my skiing ability or cold tolerance but after just 10 minutes of snowshoeing I’m usually unzipping layers like a mad woman, even in single digit temperatures like we had last week in Montana. Uphills at sea level are one thing, but at altitude–holy heart rate! Snowshoeing has freed me from feeling like I have to shell out $100 and endure crappy ski conditions to get a good workout.

2. It is practically free. Once you invest in a pair of snowshoes (which will run you about the same price as a couple of lift tickets and apres ski cocktails) there’s little to no additional costs. Many hiking trails become snowshoeing terrain come wintertime. No tune ups, lessons, lift tickets, and overpriced lodge lunches.

3. You get the same beloved “back country” experience. Imagine being surrounded by nothing but untouched snow, utter silence (except for the crunch of snow beneath your feet) and 360º of breathtaking scenery. That’s the back-country experience so many skiers seek during these cold winter months, and now I get why. Last week I learned it’s not uncommon for back-country skiers and snowshoers to share the same wintery terrain. With snowshoes, it’s not just for the hardcore anymore.

4. Snowshoeing will give you a new appreciation for winter weather. During this time of year it’s easy to complain about the cold and snow, especially when it jacks up our heating bills and messes with our travel plans. One thing I realized last week was that snowshoeing has actually gotten me excited about being outdoors in the winter again. I don’t think that’s happened since I was a 10 year old kid with a sled.

5. It’s convenient, and great for groups. Unlike some winter sports that take up an entire day and aren’t always conducive to doing in groups (ahem, skiing), snowshoeing is a fun and social activity that almost everyone can enjoy. Seasoned hikers can head for hillier trails, but you can also get a great workout on the flat trails, too. All you have to do to up the intensity is step off the snowpack and do a few minutes in knee-deep powder–you’ll be sweating in no time. One of the things I love most is that, much like a hike or a run, you can go for as little or as long as you like. Just hop in the car and hit the trail!

Snowshoeing has seriously rekindled my love for winter, and snow, and even for being outdoors in frigid temperatures–which is pretty much unheard of. If you haven’t been, all you need to get started are a pair of snowshoes (consider renting the first couple of times and testing out different styles/sizes) a pair of lighter-weight winter boots, and some snow pants or gators if you plan to venture off the trail.

Snowshoeing: Ever been before? Love it too? Got any favorite places to go?